Economic Burden of Pneumonia in an Employed Population

Objective To estimate the overall economic burden of pneumonia from an employer perspective.

Results Total annual, per capita, employer costs were approximately 5 times higher for patients with pneumonia ($11,544) than among typical beneficiaries in the employer overall population ($2368). The increases in costs were for all components (eg, medical care, prescription drug, disability, and particularly for inpatient services). A small proportion (10%) of pneumonia patients (almost all of whom were hospitalized) accounted for most (59%) of the costs.

Conclusions Patients with pneumonia present an important financial burden to
employers. These patients use more medical care services, particularly inpatient
services, than the average beneficiary in the employer overall population. In addition to direct health care costs related to medical utilization and the use of prescription drugs, indirect costs due to disability and absenteeism also contribute to the high cost of pneumonia to an employer.

"The Dublin study is among the first to show in a natural experiment that improving the air does indeed reduce deaths from cardiopulmonary disease," said Dr. Annette Peters,

During the 1980s, Dublin's air quality deteriorated after many residents opted to switch from oil to cheaper and more readily available solid fuels to heat their homes. Prompted by this decline, the Irish government banned the marketing, sale and distribution of bituminous coals within the city of Dublin in September of 1990.

Wallace Stegner "Where the Bluebird Sings to the Lemonade Springs, Living and Writing in the West"

Stegner in writing about his father: "He wanted to make a killing and end up on easy street. ... He did one last desperate and damaging thing: he managed to get an option on some land in southern California, and to make his payments and a fastbuck, he hired a crew to cut down all its two-hundred-year-old oaks and sell them off as firewood. Finally, like Clarence King and many another gambler no worse and no better, he died broke and friendless in a fleabag hotel, having in his lifetime done more human and environmental damage than he could have repaired in a second lifetime."

Wallace Stegner, ""Where The Blue Bird Sings To The Lemonade Springs: Living and Writing in the West"", Penguin Books, 1992 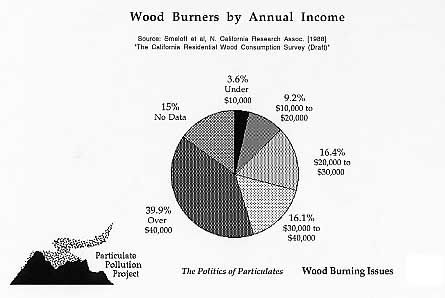