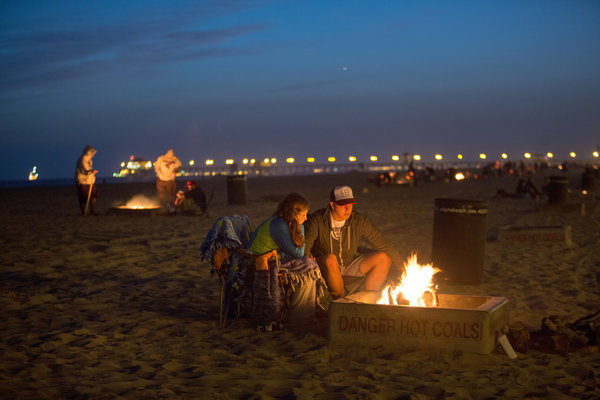 Bonfires at Huntington Beach on May 23. The fire pits there were installed decades ago as a safer alternative to the open fires that were once allowed.

But these days, a blizzard of restrictions — on everything from dogs to playing horseshoes — is being imposed on beach activities up and down the coast, turning beaches into sanitized zones that longtime beachgoers say barely resemble the freewheeling places they once knew.

Smoking is banned at many beaches across the state. On San Diego beaches, playing ball or tossing a Frisbee has been outlawed. Alcohol is no longer allowed on the sand in Huntington Beach. Even surfing is restricted to designated areas here, though this is “Surf City.”

And the next thing to go could be the fire pits — concrete rings designed to contain bonfires — which for many people are enduring features of a free, outdoor California lifestyle.

“I go to the beach today, and there are signs that say, ‘No drinking, no glass, no this, no that,’ ” said Jane Schmauss, 68, a historian at the California Surf Museum. “I want to write, ‘No fun’ at the bottom, because that’s going to be the next thing they outlaw. Or ‘No laughing.’ ”

The fire pits were installed decades ago as a safer alternative to the open fires that were once allowed. But regional air quality regulators have determined that wood-burning fires contribute to air pollution and pose health risks for those who live nearby, and last month they proposed removing more than 800 fire pits that dot the coastline of Los Angeles and Orange Counties, the heartland of Southern California beach culture.

But while beachgoers have largely accepted previous regulations, if not always abided by them, residents here have viewed the effort to remove the fire pits as an assault on their local way of life.

At a public hearing this month, more than 100 people rallied behind a cry of “Keep your mitts off our pits” in an effort to keep the fire rings here. And Travis Allen, a state assemblyman who represents Huntington Beach, has introduced a bill in the Legislature to support the protection of “important traditions that are integral to our culture and beach lifestyle, such as fire rings.”

Joe Shaw, a city councilman in Huntington Beach, said the tradition of gathering around fire pits at night “epitomizes the California dream of so many.” Each weekend, scores flock to Huntington Beach’s more than 500 fire pits, which bring in an estimated $1 million annually for the city in parking fees alone.

“I grew up in Oklahoma, and when I was a kid, all I could do was wish that I could live someday in a beach town where they surf all day and clambake all night,” Mr. Shaw said. “That’s what California is to a lot of people. Let’s preserve that.”

But that dream of the beach as a realm of endless, carefree fun has increasingly clashed with concerns about safety and public health as the region’s population has boomed, more people visit the beach, and homes (many belonging to wealthy, politically powerful residents) have been built closer to the ocean.

Jefferson Wagner, a former mayor of Malibu known to local residents as Zuma Jay, fondly recalled the days when he would warm up at fire pits all over Southern California after surfing with his friends. They would camp on the beach (now banned), bring their dogs (banned) and set off fireworks on the Fourth of July (banned).

San Diego banned alcohol on city beaches after a drunken brawl broke out at Pacific Beach on Labor Day six years ago. Many other cities, including Huntington Beach, have imposed beach curfews, which officials here have credited with reducing late-night crime.

Even playing Frisbee, innocuous as it seems, can be dangerous if the beach is crowded enough, officials said.

“It is a sanitizing of beach culture,” Mr. Wagner said. “We all miss the freedoms we used to have. But when there is greater attendance at the beach, we do have to modify how we use it.”

A version of this article appeared in print on May 31, 2013, on page A10 of the New York edition with the headline: Is a ‘No Fun’ Sign Next? Pollution Concerns May Douse California Beach Fires.

Get Free E-mail Alerts on These Topics