Fungus: Wood and wood ash are known to be sources that bring mould and fungus into the home. (Some experts say the spelling of mold is mould.) 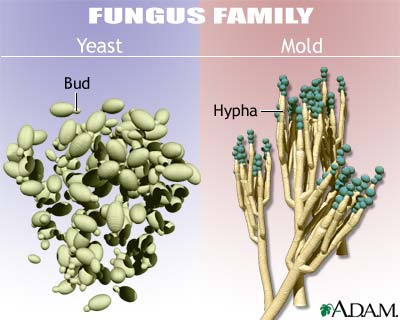 More information with pictures of Aspergilloma of the lung http://adam.about.com/care/allergy/allergy_mold.html

"Some kinds of Aspergillus may cause several different illnesses, including both infections and allergy. These fungi may lodge in the airways or a distant part of the lung and grow until they form a compact sphere known as a "fungus ball." In people with lung damage or serious underlying illnesses, Aspergillus may grasp the opportunity to invade the lungs or the whole body." Adam

Injury to the lung occurs from the sharp, asbestos sized wood smoke particle. More information on how moulds and fungus affect the body are below. Ed

Detailed health studies were made in 81 patients in 4 fungi contaminated buildings. The first case involved a Las Vegas family of 4 which had heavy fungal growth due to blocked drainpipes and leaking plumbing. The family suffered severe fatigue, severe headaches, diarrhea and asthma. Both the 40 year old mother and 10 year old daughter asthma were bad enough to require several hospitalizations, and the 43 year old father required 20 operations to remove skin cancers. The 13 year old daughter had been severely depressed and had attemped suicide.

The second case involved a Kentucky family of 4 who lived in a house which had a fire and suffered water damage in putting out the fire. The family suffered many ill health effects including severe asthma, difficulty concentrating, severe diarrhea, skin rashes, depression and other psychological problems and severe fatigue even when they got 16 hours of sleep a day.

The third case involved a 55 year old women who moved into a home with insulation with no moisture barrier that became heavily contamined with fungi. This woman suffered severe asthma, loss of memory and balance, and scarring from intense itching of arms. She also developed "severe chemical hypersensitivity" which made shopping in malls difficult and resulted in severe falls due to lack of concentration.

The fourth case involved 72 patients living in a New York City apartment with water damage and poor moisture control. Visible mold was present in many of these apartments and could be easily removed by forceps. Many health problems were reported by a majority of these 72 patients including, depression, chronic fatigue, "debilitating chemical hypersensitivity", headaches, heart pains, loss of concentration and balance, asthma and diarhhea.

2003 OCHRATOXIN AND KIDNEY DAMAGE Ochratoxin is a toxic metabolite produced by fungi in the Aspergillus and Penicillium genera. Ochratoxin is carcinogenic, immunotoxic and neprotoxic (damages kidneys). Ochratoxin can cause toxic effects either by ingestion of contaminated food or by inhalation of contaminated dusts (Mycopthalogia 1999;146:99-103). A Tunisian study found that 954 patients with nephrotoxicity averaged 44.2 parts per billion of ochratoxin in the blood as compared to only 1.2 parts per billion ochratoxin in healthy controls.

- Salwa Abid et al. Ochratoxin A and human chronic nephropathy in Tunisia: is the situation endemic. Human and Experimental Toxicology 2003;22:77-84.