"Holy Smoke: The candles and incense burned in some churches release dangerous amounts of carcinogenic particles-up to 20 time more than the amount found in pollution on busy roads, according to a new study." Bottom Line health, February 2005 as reported from the European Respiratory Journal. 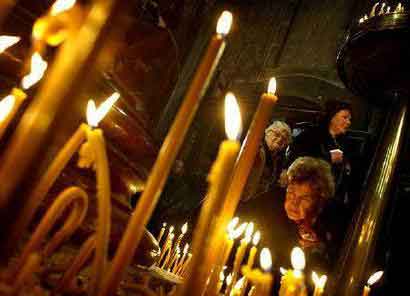 AMSTERDAM (Reuters) - A visit to church may be good for the soul but not so good for the lungs, a new study shows.

Scientists from Maastricht University found that burning candles and incense in church can release dangerous levels of potentially carcinogenic particles, according to research published this week in the European Respiratory Journal.

"After a day of candle burning we found about 20 times as much as by a busy road," Theo de Kok, the author of the study, told Reuters.

"These levels were so unbelievably high we thought we should report it to the public."

The air at a Maastricht basilica contained 20 times the European Union (news - web sites) limit of PM10 particles after a simulated mass ceremony. Tiny PM10 particles can be inhaled and are therefore a potential hazard.

"The exposures are worrisome, not so much for the occasional church goer, but priests, choirs and other people working in churches may have significant exposure," he said.

De Kok said priests at the church in Maastricht had tried to improve ventilation after the study. He also noted some churches had stopped using real candles to protect artwork and delicate interiors.

"It could be an alternative to use fewer candles, better candles, use electric candles or improve ventilation," he said.

De Kok called for research into whether priests, monks and others who work in churches were more prone to lung disease.

"Particle pollution, whether it be in an outdoor or indoor environment, can be a danger to lung health and cause respiratory diseases such as emphysema and bronchitis," said Richard Russell of the British Thoracic Society (BTS).