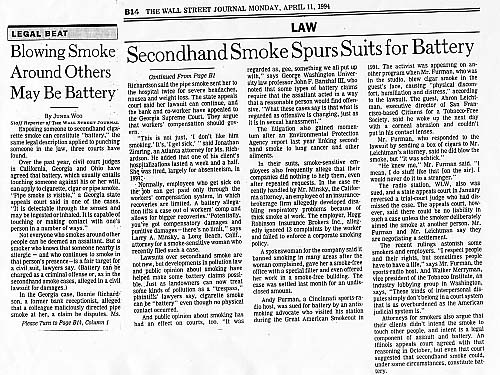 "She was released after being charged with aggravated battery, which carries up to 15 years in prison"

The Associated Press
JENSEN BEACH, Fla. — When Lynda Taylor put on perfume and lit scented candies around the house, it wasn't romance she had on her mind. It was spite, police say. Taylor, 36, was arrested last week on charges she tried to seriously injure her chemically sensitive husband. In addition to using the perfume and candies, Taylor sprayed the house with bug killer and Lysol disinfectant, plugged in scented air fresheners, and emptied lavender sachets around the home, her husband says. David Taylor, 46, says the fragrances caused him to swoon—and not in the hearts-and-flowers sense, either. He says he fell into a stupor that left him too feeble even to call for help."This extreme exposure made me very ill with severe brain fog, headache, numbness and trembling and pain throughout my body so severe I could barely move," he wrote in his complaint. His wife denies using fragrances to torment her husband and suggests he is faking his sensitivity to chemicals. She says she often dabbed on perfume and it never affected him before during their 3-year marriage. "He takes a little bit of the truth and twists it into full-blown lies, " she says. Taylor's husband claims to suffer from a rare disorder called multiple chemical sensitivity and allergic reaction to perfumes and other scents that he says can be fatal. The couple had been feuding over a $150,000 workers' compensation settlement that the husband received in March for his illness. Taylor says he and his wife were talking about splitting up, and his wife became hostile when he refused to give her half the money and the house. He says his wife, with help from her stepdaughter, subjected him to three days of torment in early April. She started with perfume, then moved on to other scents after police came to the couple's home and said it wasn't a crime to wear fragrance, he says. "They thought the effect it had on me was hilarious," he wrote in his complaint Finally after Taylor's doctor supplied a letter to verify his sensitivity to scents, police arrested the wife. She was released after being charged with aggravated battery, which carries up to 15 years in prison

This is a precedent for people being poisoned not just by scents, but by the long known problem of wood smoke.